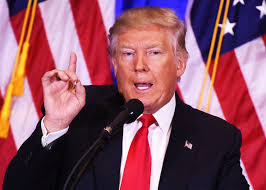 Ok, I am so sick of these Trump supporters who have supported Trump from the beginning with reasons even they can’t verify by any reliable source. So I have a challenge for them. Show me 1 selfless deed he has done that has been good for you, for average people, for any American and not just self-serving or for the super rich, or for publicity, or where he has gained a profit from, that everyone can agree is something HE did that helped someone without any gain of any sort for himself.

This means, not the time he sent a helicopter to help people only because his company needed the “good” press, not the charities he forms where he can feed his narcissistic tendencies by naming it after himself and makes sure he uses them to buy things or get tax breaks, not the one time he held the door for his wife because the press was watching. No, this needs to be one truly selfless thing he has done to help ANYONE other than himself or his own family.

Being a narcissist, I would bet even his family would have a hard time coming up with 1 thing. Because knowing the narcissist behavior, anything he does nice for those he loves is only to gain or keep their admiration and praise. So again, it goes back to selflessness. Is he or has he ever been capable of doing something completely selfless to help someone.

The Republicans and his Followers stating that what he is doing is great, or him praising himself, does not count. Him signing a bill that has no validation of actually being “good” doesn’t count.

And I don’t want answers like “he’s going to….” or “he says he….” or “he’s a good businessman” which is the most common answer I get. He is actually a horrible businessman, but I can say one good thing about him, which is in no way a Good Deed, just a trait he has, he is an excellent marketer and brand expert.

You know that time when someone in front of you at Starbucks pays it forward by paying for the car behind them, then you pay it forward by passing it onto the next car and so on? This is selfless giving. You don’t do it for the tax break or for the recognition, you do it because you have the money, are capable and want to do something nice. I believe Trump is the guy who NEVER pays it forward and would ALWAYS take the money. And anytime he does something nice, he does it for monetary gain or personal fame.

I’m over it. I have searched the internet and have not been able to find even ONE GOOD THING that he has said or done that is real and not just him bragging about how great he is.

I challenge you to show me ONE, just ONE thing he has done good that is proven to be good for the people or any person and not just for the super rich and wealthy friends and himself. Show me just ONE thing that the people can agree is a good deed that he has done, not just since being in office, but in his whole lifetime or is currently doing that is good for the people and matters to the majority and that he hasn’t gained anything from.

The Trump Challenge – Show me just One Good Selfless Deed in his Whole Life where there is proof that he did not gain anything from it.

Oh, and one disclaimer. When you try to present me with something and I can shut it down with proof, don’t get mad at me and tell me I am just trying to find the bad. I am trying to find the truth and I will present all evidence to disprove any “alternative facts” that you present.